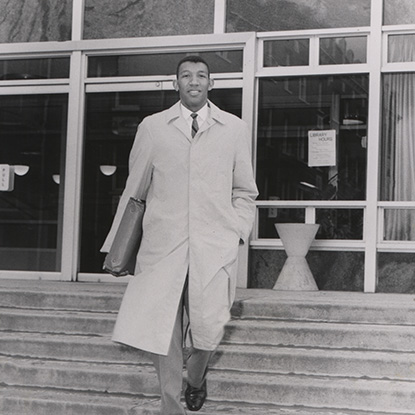 Photo was taken from the Gonzaga University Digital Archives.

He attended Eudora Colored High School before enlisting in the U.S. Air Force. He later went on to attend Gonzaga University and the Gonzaga University School of Law in Spokane, Washington. While there, he was a class officer, student body representative and class president. In 1995, he received the Gonzaga Law School Distinguished Judicial Service Award.

Judge Burgess was appointed to his position as United States District Judge for the Western District of Washington by President William Clinton in March 1994. Prior to becoming a District Judge, he served as a United States Magistrate Judge for 12 years; Regional Counsel for the Department of Housing and Urban Development, Region 10; and a partner in the law firm of Tanner, McGavick, Burgess, et al. He has also been an Assistant City Attorney for Tacoma and Judge pro tem for the Tacoma Municipal Court and the District Court of Pierce County.

Judge Burgess was the recipient of the Loren Miller Bar Association Lifetime Achievement Award and the Outstanding Service Award from the Federal Bar Association of the Western District of Washington. He was also given the key to the City of Eudora, Arkansas in October 1997. Judge Burgess has been a member of numerous organizations, including the Pierce County, state and Loren Miller Bar Associations; Tacoma Boys Club; Board of Directors of the Boy Scouts; Urban League; past president of the local chapter of the NAACP; the Board of Regents of Gonzaga University and Shiloh Baptist Church. He also participated in many building projects with Habitat for Humanity, one of his great passions.

You can learn more about Honorable Judge Burgess HERE.